skip to main | skip to sidebar

A Princess in Camelot 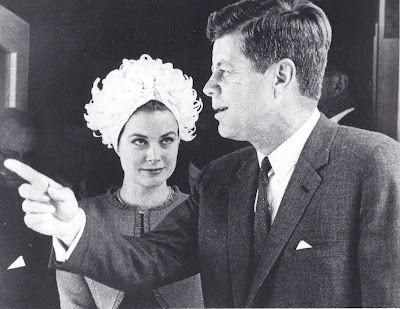 Before JFK married Jackie there were rumors that he and Grace Kelly had a crush on one another. Jackie strode in and that chapter closed. But Letitia Baldridge remembers fondly that Jackie, and her beautiful sister Lee ran into Grace in New York City while John and Jackie were dating and John was in the hospital recovering from back surgery. Jackie and Lee convinced then-Grace Kelly to pretend to be a nurse and go into JFK's room. Even in an agonizing state of pain, he knew the stunningly attractive actress the moment she entered the room.

The rest is tragic history.

But one day, before all that and after everyone had arrived in their places, they saw one another again. This time, they were no longer Jack Kennedy, Jackie Bouvier, and Grace Kelly. But Mr. President, Mrs. Kennedy, and Princess Grace of Monaco and they were joined by The Prince of Monaco (Rainier) at the White House, instead of a hall in a hospital. A significantly more formal event, a luncheon meeting, occurred on May 24, 1961. 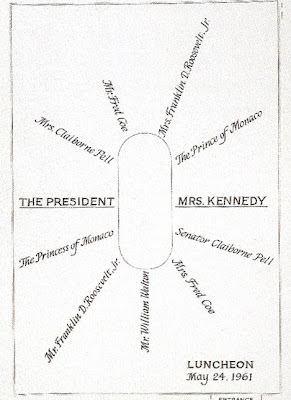 They dined well, as you expect. Rene Verdon's menu was, like them all, painfully exquisite and perfect for the springtime.

The soft shell crab dish was straight forward: Breaded and coated again with slivered almonds. Interestingly, the lamb dish was skewered and then broiled and served with a medley of spring vegetables. Salade Mimosa, in this case, was a green salad tossed with hard cooked egg and dressed lightly with olive oil and wine vinegar. Finally, Strawberries Romanoff is berries in Grand Marnier syrup over and under a pastry cream consisting of equal parts whipped cream and vanilla ice cream and topped with candied violets.

Every time I look at these photos, and my kids, I wish I could stop time. 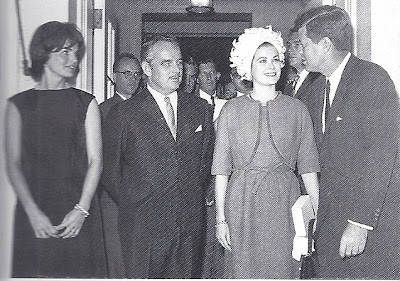 All credits: In the Kennedy Style, Letita Baldridge (1998, Doubleday)
Posted by The Blushing Hostess at 4:15 AM

After seeing Julie, julia last evening I automatically fell in LOVE with this post...I'm echoing your thoughts on stopping time, if only we could....such fascination the Kennedy saga has held for many of us. Such Drama....xoxo~Kathy~@ Sweet Up-North Mornings...

I love this entry. Jackie and Grace are such style icons. I love that first photo - what a look she is giving JFK!

Lovely post. Thanks so much for visiting my blog yesterday! Come by anytime!
Hugs,
Susan

Blushing, A wonderful post,with just the right seasoning, the hospital story-such a delicious little morsel. I have seen some of the photographs of the visit- The only photographs of GK that disappoint.The hat (a No Your post- Perfection. G.

Thank you so much for your prayers! I'm sorry if the story upset you, we're the same way with animals. She would have been our fourth rescue (we have two dogs and a cat). The vet said she didn't suffer and I know she knew we loved her at the end. I'm still torn up about it (can't make myself stop crying, which has made work interesting this morning!) and probably will be for a while so I truly appreciate your continued prayers!

This post was lovely. Took me back in time for a minute, which is always nice.

Hope you have a great day!

Such a glamorous time-I love those pictures!

Thanks for stopping by my blog-come by anytime!

I am glad that you have stumbled upon my blog, because I am now in LOVE with yours. We do seem to have similar interests. This story and the details are things that I love reading about.
Have a great weekend!

I'm not quite sure about the Princess's hat. Though it focusses attention on her beautiful face, it also seems a bit dowdy, which she became more and more as time went by. As a friend of mine once observed in conversation when I asked, "Grace Kelly?" ... "Chic", he said ... "Princess Grace?" ... "Not chic", he said flatly. He felt Monaco made her personal style heavyweight rather than elegant.

Matronly, I mean to say.

love this! I always love looking at old photos and anythign having to do with the Kennedy family.

Speaking of, its been an interesting few days here in Boston with the passing of Ted. Tonight and tomorrow are sure to be busy with all 4 living presidents in town.

Enjoyed this read!
They certainly did go to great lengths to entertain and bless others.
May you have a great week-end,
d

Thank you for these reminders of beauty and grace and elegance personified.

Such a sad week! Ted Kennedy, the champion of health care, may you rest in peace. I hope someone picks up the baton and continues on with your dream!
Brenda

But now we do not feature French food. For all we give up we find something new. I think. I hope. I don't know.

Great post - I agree with the other comments about Princess Grace looking matronly. Such a shame. Jackie seemed to be able to avoid that :)

Hi,
Loved your post... what an amazing civilized time. The picture of Princess Grace giving the President the eye is priceless... I think I saw a bit of jealousy in the 2nd photo...on Jackie's part (do you think?). Very fun.. thanks for sharing a classic event..I agree let's stop time.
Maryrose
PS Thanks for visiting, I enjoyed visting you.. it was a treat :)

what a cool post!it's amazing to learn what goes on at dinners in America's camelot.

The Blushing Hostess
A curious and interested young mother and recently retired fashion executive with an interested eye for life and home style.